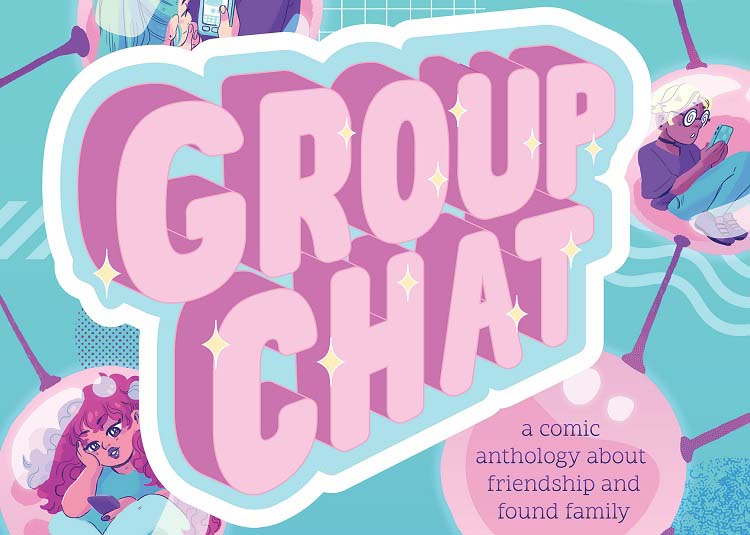 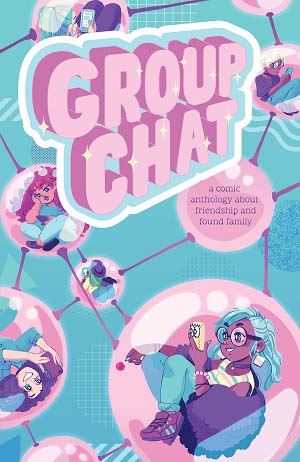 Family is the thematic focus of a recent issue of Parabola, a journal that explores the meaning of existence through expressions of myths, symbols, traditions, and religions. In her editorial for the issue, Tracy Cochran opines that “Our true family isn’t necessarily to be found among our closest relatives” and relates that the purpose of this issue’s essays is to “explore the way a healing connection and a deepened sense of meaning and possibility can sometimes be found among fellow seekers and kindred spirits.” While not unique to queer people, the experience of found families and the love which they can foster is well known to us especially when families of birth are so often a source of anxiety and sadness over the fear and painful reality of rejection.

The found family theme brings me to a recent anthology titled Group Chat with a focus on found families and friendship.  Inside are a dozen and a half stories by twenty cis and trans queer writers and artists offering their takes on fellow seekers and kindred spirits. As with any anthology, there is a wide range of settings from fantasy to sci fi to western to slice of life that I found each team used to their great advantage in presenting their pieces. My past experiences with anthologies, and maybe yours too, has often been that some stories appealed to me more than others, and I suspected this might be the case for me again before I started to read Group Chat. What I discovered is every story engaging my mind and my heart, reaffirming the need for human connections most especially after the anxiety and frustration I’ve felt as have so many of the LGBTQ people due to the current political and social climates. Having people in your social media network reminding everyone about self care is good but to have stories that make for a touchstone is wonderful on a whole other level. That brings up something which seems relevant here. Some years ago an art professor and I were talking about a number of things over coffee. As one of the topics was the place of stories in art making, she, a gentle soul, brought up cultural anthropolgist Clifford Geertz whose work revolved around the power of the stories we tell ourselves about ourselves as we make sense of the world. The messages of community and support in Group Chat are even more necessary when there is an administration, its surrogates, and a cable news network dispensing lies and propaganda on a daily basis.

Some of my frayed edges started to mend while reading Group Chat and I suspect Group Chat will make for a nice touchstone to revisit.

The crowdfunder for Group Chat has finished but you may purchase the anthology from several of its contributors who’ll be appearing at upcoming cons such as Flamecon, SPX, and Geek Girl Con. Print and digital copies can be ordered through Gumroad where you can also find other POME books.

What follows is a creator roster and commentary on their submissions.

Buffer by Vixie Bee and Joanna Marsh illustrate how simple acts help keep a young trans woman upbeat and positive amid a day of small and large trials through the allegory of magical armor. Before reading their story my perspective on psychological armor like this was as a burden.

Coven of Wellington Woods by Kelsey Choo is a charming story featuring a young squirrel on her search for belonging and finding it with the Spellkaster Sisters as they tackle an enchanted arachnid.

Rachel Weiss’ Shift is about a band of young warriors charged with protecting their village and helping one of their own when a comment creates a stressful situation. Sometimes even our closest friends mess up. Weiss shows that accountability can be an uncomplicated, guilt free responsibilty when handled timely instead of angst ridden affair.

Pretty Trans & Co. by stc019 is a wonderful slice of life story about two trans friends trying to make their dream of a clothing design company a reality. The reality of following your passion doesn’t have to be overwhelming when you share your feelings. This is a nice reminder of a simple truth that I need now and then and to cherish those singular friends.

Con Artists by Caitlin Zellers relates what may be an autobiographical piece of a young artist overcoming her social anxiety as she tables in various Artists Alleys at comic conventions by bonding with other artists and writers through simple acts. The way Zeller concentrates on figures while leaving backgrounds minimal is really well done.

N. Queen shows how living life on your own terms can make for beautiful if unexpected friendships in An Old Man Gets Beat Up in This One but He’s Okay. Set in the Wild West, a young woman wanting justice accepts the invitation of an old bounty hunter to become one herself. Queen’s flowing linework makes for an upbeat story.

One of the longer stories is The Right Ingredients by Ashley Robin Franklin. It’s a fun magical slice of life quest by friends getting way outside their comfort zones to come through for a mutual whose spell absurdly backfired.

It’s Rocio to the rescue when best friend Brenna experiences a dressing room dilemma in Best Dressed by Lara Willard and Julia Hutchinson. Reflections in full length mirrors can be cringe worthy under normal circumstances, but it’s really traumatic for Brenna who’s adjusting to her new body and image post mastectomy. Best Dressed had me tearing up and then smiling with the outcome.

Anyone with a pet knows that found families aren’t always exclusively composed of humans. Katherine Lang’s Lost and Found is a futuristic tale about salvagers Sabrina and Minerva whose business is to rescue AIs from derelict space ships. What will it take for the two women to persuade an abandoned AI whose protocol is set to attack to join them and their non carbon companions Farren and Niles?

Paloma Hernando’s Tender in the Dusk is a beautiful, poignant essay on what makes us human. Post divorce, Jane is temporarily living in a sparse house when she becomes unintentionally drawn up in a neighborhood book club of suburban housewives. At least that’s the story Jane tells the neighbor ladies. She might be something other than your regular divorcee but it doesn’t matter in the end. Jane finds happiness and comfort with her new circle of friends. 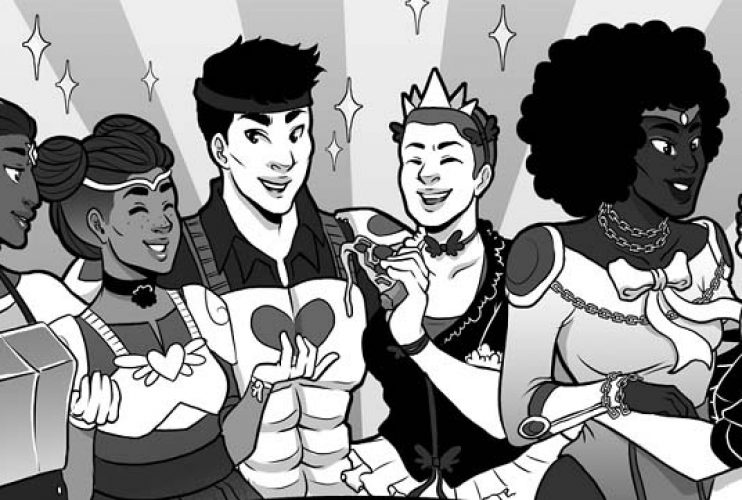 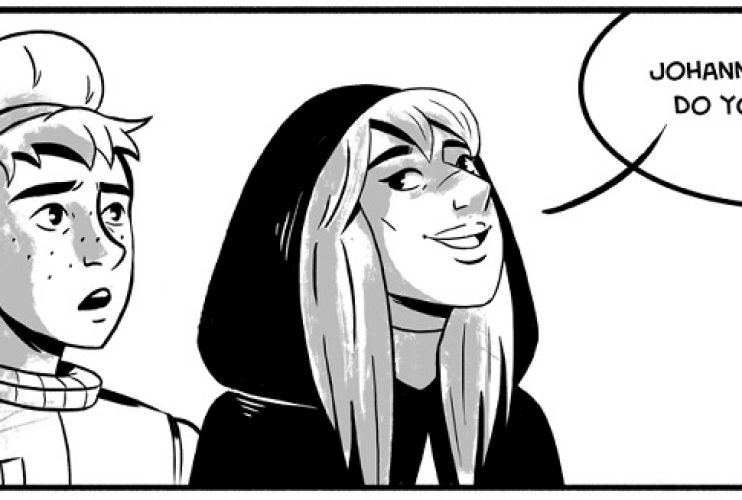 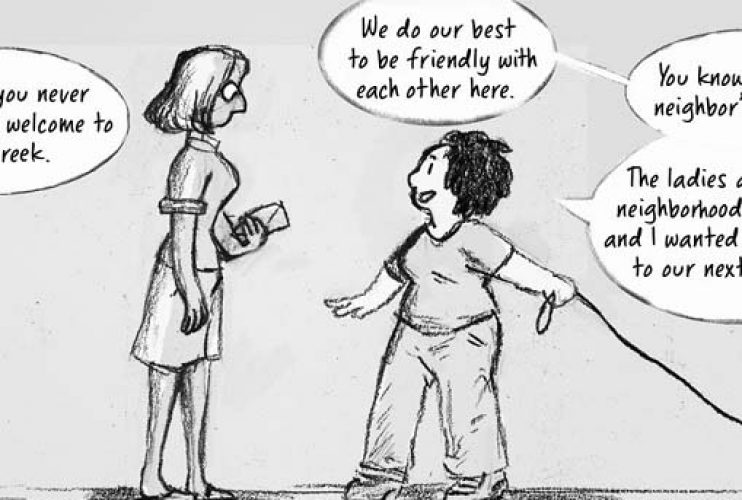 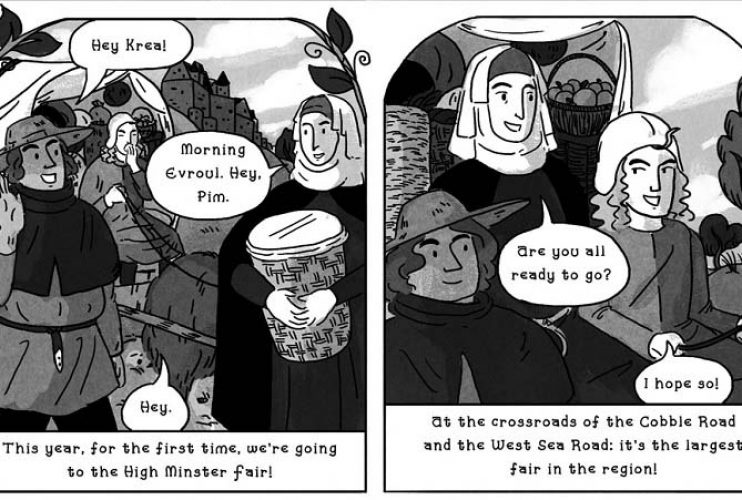 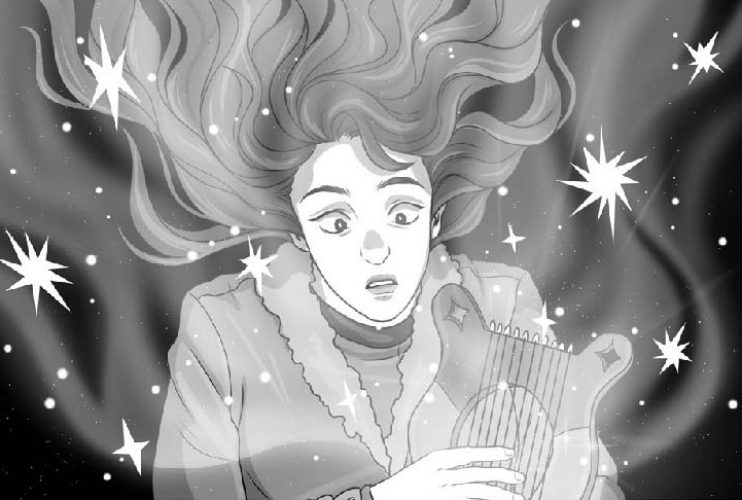 Sydney, Diya, and Yasmin are three tight high school seniors who’ve made a secret pact to carry out some social justice on the local scale the night before graduation in Oh Bondage, Up Yours. As the title hints at, Ashley Gallagher and David Tarafa’s story references America’s legacy of slavery and bigotry. I love the dynamic of youthful energy and awareness versus ignorance and adult complacency.

Little Corvus’ To Come Home is a pure joy. I would happily read more about Colin and Pip having little adventures or simply hanging out together.

Vreni Stollberger’s The Faire is placed against a medieval backdrop with three friends selling their wares at a large annual festival. The dialog is peppered with humor and Stollberger’s creative panel borders are a nice touch! The Faire and Caitlin Zellers’ Con Artists nicely complement each other.

A change in a friend’s life can sometimes call into question our own place and direction in life. That dyanmic is the subject of and Greg by Carolynn Calabrese and Jen Overstreet. Ana and Sophie have been friends for a long time. Ana throws herself into her work and Sophie is…recently in love with Greg who possesses a gregarious, sucking the air out of a room personality that grates on Ana’s nerves till she breaks. Overstreet’s fluidly expressive line work helps Calabrese deliver a surprise for Ana.

Gabriela Gutiérrez has a playful romp in Constellations. Math is hard! Okay, it was for me. Just imagine how difficult the calculus for Constellation Making 101 is! No wonder young Miss Borage is discouraged and on the verge of tears. Thankfully Borage’s interdimensional friend Cy offers a poetic allegory that clicks for her.

Camaraderie is front and center in Gianna Meola’s Circuit. A trio of teenage boys discover that the journey is more important than the destination when their spontaneous concert plans in the big city are ruined.

Kaz Rowe’s beautifully rendered Ten Strings Too Far has a folk tale aura with Danika, Pyotr, and Chessa as protectors of the forest and is a fitting piece on which to close the book. 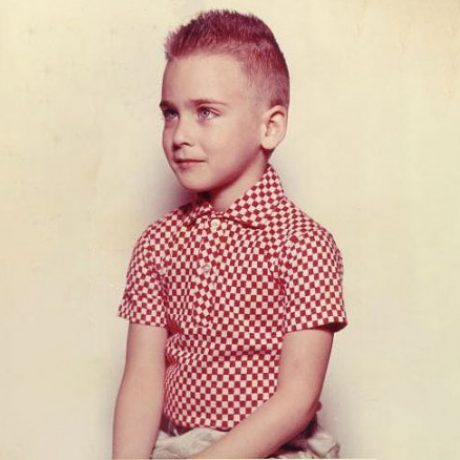